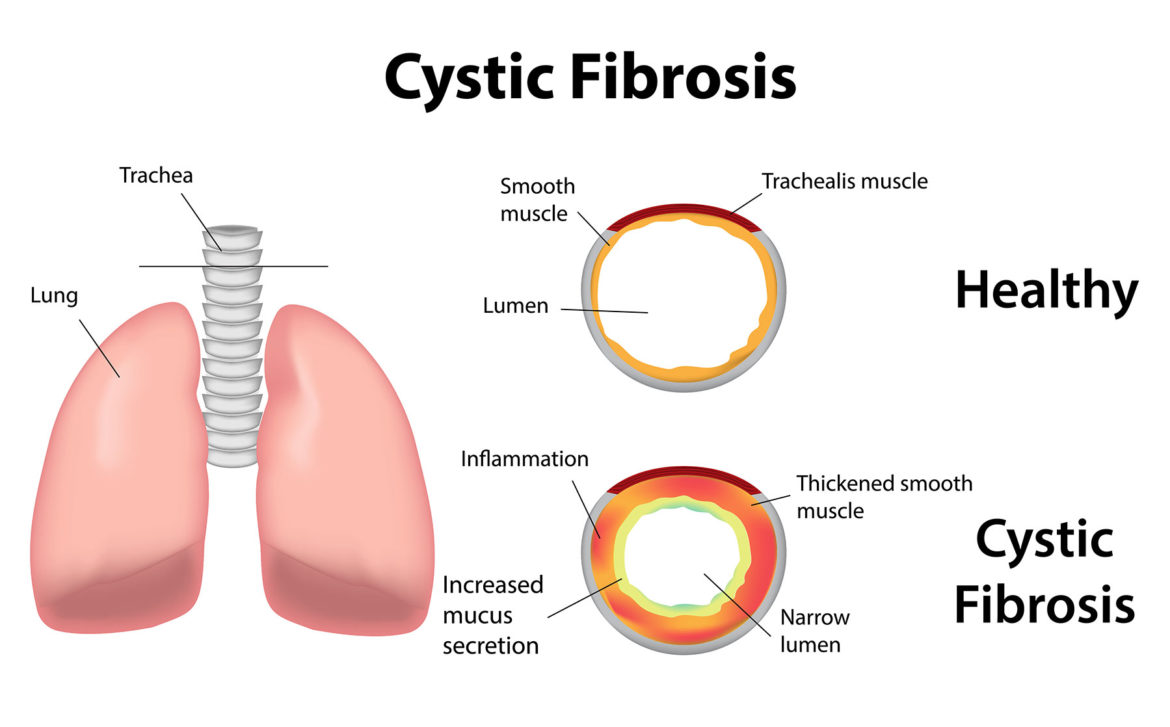 Pancreatic enzyme replacement therapy plays a key role in maintaining health in people with cystic fibrosis Johannesburg, June 2019: May was National Cystic Fibrosis Awareness Month, encouraging education in the battle against this disease which is usually diagnosed in childhood. An inherited life-threatening disorder, cystic fibrosis (CF) affects all parts of the body, predominantly the lungs and digestive system.1

According to the South African Cystic Fibrosis Association (SACFA), there is currently no accurate information of cystic fibrosis patients in South Africa.2 “CF occurs in people of all races and backgrounds throughout the world. It is estimated that there are approximately 700 people with cystic fibrosis in South Africa,” says Dr Marco Zampoli, Paediatric Pulmonologist and Head of the CF Clinic at the Red Cross Children’s Hospital, who has been working on a national CF registry launched in 2018 which will hopefully provide more accurate information in the near future.

However, due to the complex nature of the disease, limited access to diagnostic tests outside the main cities and low levels of CF awareness in society, an unknown number of people with CF are  likely being misdiagnosed with conditions that resemble CF such as asthma, tuberculosis or malnutrition,  and subsequently do not have access to proper treatment. These people, children more specifically, often die from malnutrition or pneumonia. Because treatment is available, it is important to reduce the incidence of misdiagnosis by raising awareness of the disease in all parts of South Africa.2

According to SACFA, CF affects a number of organs in the body, primarily the lungs and pancreas, by clogging them with thick and sticky mucus.2

Prominent symptoms, which often appear in infancy and childhood, include:2

Dr Zampoli says the most important aspect of therapy in CF is preventing malnutrition and lung damage that is caused by thick mucus and infection, so as to maintain a good quality of life. “The damaging effects of CF begin in early life and accumulate over time. Early diagnosis and appropriate medical treatment in early life is critical to ensure people born with CF can lead normal, healthy productive lives.”

There is no cure for CF1. However, advancements in treatment have made it possible for people with CF to live much longer than ever before1. Among these is Creon, a pancreatic enzyme replacement therapy (PERT) in the form of capsules, that enables people with CF to absorb nutrients from food. It is specially designed to help the body absorb fats, proteins and carbohydrates.3,4

Because around 85% of CF patients have pancreatic exocrine insufficiency (PEI) by early childhood, maldigestion and poor growth resulting from PEI is a characteristic feature of cystic fibrosis.5  Prolonged, untreated PEI is associated with a poorer prognosis in the long term.5 Treatment is particularly important for children, as ensuring adequate growth is important.5,6 By treating CF patients with PERT, nutritional management of patients with CF is improved, and future growth failure and chronic malnutrition can be prevented.5

In studies of children with CF, Creon has been shown to improve the rate of fat absorption with good safety and tolerability, helping to control the symptoms of CF and enabling the patients to achieve satisfactory weight gain.6

PERT comes in the form of capsules containing specially coated enzyme beads (microspheres).3,4 For infants and younger children, who cannot swallow capsules whole, the capsules can be opened and the coated microspheres mixed with fruit gel.7  This can be fed to the infant before and during their feed. Older children can have microspheres mixed with yogurt or pureed fruit. 7 For children and adults, PERT capsules should be taken with every meal, including snacks.3,4,7

Speak to your doctor or pharmacist who will assess your need for PERT.

Vitamin B12 deficiency: The sign in your hands and feet you are lacking the vitamin

9 Ways To Design Your Kitchen So You...

This is the ‘fainting’ dance craze taking SA...

Are you listening to your heart?

Germs grow on medical implants, but can they...

They transform their special discounts each day, check the internet site frequently.

Iím impressed, I must say. Seldom do I encounter a blog thatís equally educative and amusing, and without a doubt, you have hit the nail on the head. The problem is something which too few folks are speaking intelligently about. Now i’m very happy I came across this in my search for something concerning this.

You need to make certain you download premium quality therefore it will sound the very best. Check kilobytes the tunes performs at for every secondly for comprehension of quality of sound.

After checking out a number of the articles on your site, I seriously like your technique of writing a blog. I bookmarked it to my bookmark webpage list and will be checking back soon. Take a look at my web site too and let me know how you feel.

Good article. I will be dealing with many of these issues as well..

Greetings, I think your web site may be having browser compatibility problems. Whenever I take a look at your website in Safari, it looks fine however, when opening in Internet Explorer, it’s got some overlapping issues. I just wanted to give you a quick heads up! Besides that, fantastic site!

An interesting discussion is definitely worth comment. I think that you need to publish more about this subject, it may not be a taboo matter but generally folks don’t speak about such subjects. To the next! All the best!!

Very nice blog post. I absolutely love this site. Thanks!

Hi, I do think this is an excellent site. I stumbledupon it 😉 I am going to revisit yet again since I bookmarked it. Money and freedom is the greatest way to change, may you be rich and continue to help others.

Itís difficult to find experienced people in this particular topic, but you seem like you know what youíre talking about! Thanks

Spot on with this write-up, I honestly believe this amazing site needs a lot more attention. Iíll probably be returning to read through more, thanks for the info!

Spot on with this write-up, I really think this website needs far more attention. Iíll probably be returning to read more, thanks for the advice!

Good post! We will be linking to this great content on our site. Keep up the great writing.

I need to to thank you for this great read!! I definitely enjoyed every bit of it. I have you bookmarked to look at new stuff you postÖ

Way cool! Some very valid points! I appreciate you penning this article and the rest of the website is also really good.

This page really has all the information I wanted about this subject and didnít know who to ask.

Good blog you’ve got here.. Itís difficult to find quality writing like yours these days. I seriously appreciate people like you! Take care!!

I love reading a post that can make men and women think. Also, thank you for allowing for me to comment!

I’m excited to find this great site. I need to to thank you for your time for this particularly fantastic read!! I definitely really liked every bit of it and i also have you book marked to see new information on your blog.

You should take part in a contest for one of the greatest websites on the internet. I will highly recommend this blog!

I was excited to find this page. I want to to thank you for your time for this fantastic read!! I definitely really liked every part of it and I have you saved as a favorite to see new things on your blog.

This is a topic that’s close to my heart… Take care! Exactly where are your contact details though?

This is a topic that’s near to my heart… Best wishes! Where are your contact details though?

This is a topic which is near to my heart… Many thanks! Where are your contact details though?

After looking over a few of the articles on your web page, I seriously like your way of writing a blog. I saved it to my bookmark website list and will be checking back soon. Please visit my website as well and let me know how you feel.

Your style is very unique compared to other folks I have read stuff from. Many thanks for posting when you have the opportunity, Guess I will just bookmark this page.

Hello! I could have sworn Iíve been to this site before but after looking at many of the articles I realized itís new to me. Regardless, Iím definitely happy I stumbled upon it and Iíll be book-marking it and checking back often!

Spot on with this write-up, I seriously believe this amazing site needs a lot more attention. Iíll probably be back again to read through more, thanks for the advice!

After I originally left a comment I seem to have clicked the -Notify me when new comments are added- checkbox and now whenever a comment is added I recieve 4 emails with the same comment. Is there a way you can remove me from that service? Cheers!

Next time I read a blog, Hopefully it won’t fail me just as much as this particular one. After all, Yes, it was my choice to read through, nonetheless I truly believed you would probably have something helpful to say. All I hear is a bunch of whining about something that you could possibly fix if you weren’t too busy searching for attention.

Everything is very open with a precise description of the challenges. It was truly informative. Your site is useful. Thanks for sharing!

This excellent website definitely has all of the information and facts I wanted concerning this subject and didnít know who to ask.

There’s certainly a great deal to learn about this subject. I really like all the points you have made.

Your style is unique compared to other folks I have read stuff from. Thanks for posting when you have the opportunity, Guess I’ll just bookmark this web site.

Your style is really unique compared to other people I have read stuff from. Thanks for posting when you have the opportunity, Guess I will just bookmark this web site.

I blog quite often and I seriously thank you for your content. Your article has truly peaked my interest. I’m going to take a note of your blog and keep checking for new information about once per week. I subscribed to your RSS feed too.

I used to be able to find good info from your articles.

Very good info. Lucky me I discovered your blog by chance (stumbleupon). I’ve book-marked it for later!

Greetings! Very helpful advice in this particular post! It’s the little changes that produce the most important changes. Thanks a lot for sharing!

Everything is very open with a clear clarification of the issues. It was definitely informative. Your website is very helpful. Thanks for sharing!

This web site definitely has all of the information and facts I wanted concerning this subject and didnít know who to ask.

You’re so cool! I don’t believe I’ve truly read through a single thing like that before. So wonderful to find another person with some unique thoughts on this subject. Really.. thanks for starting this up. This site is something that’s needed on the internet, someone with a bit of originality!