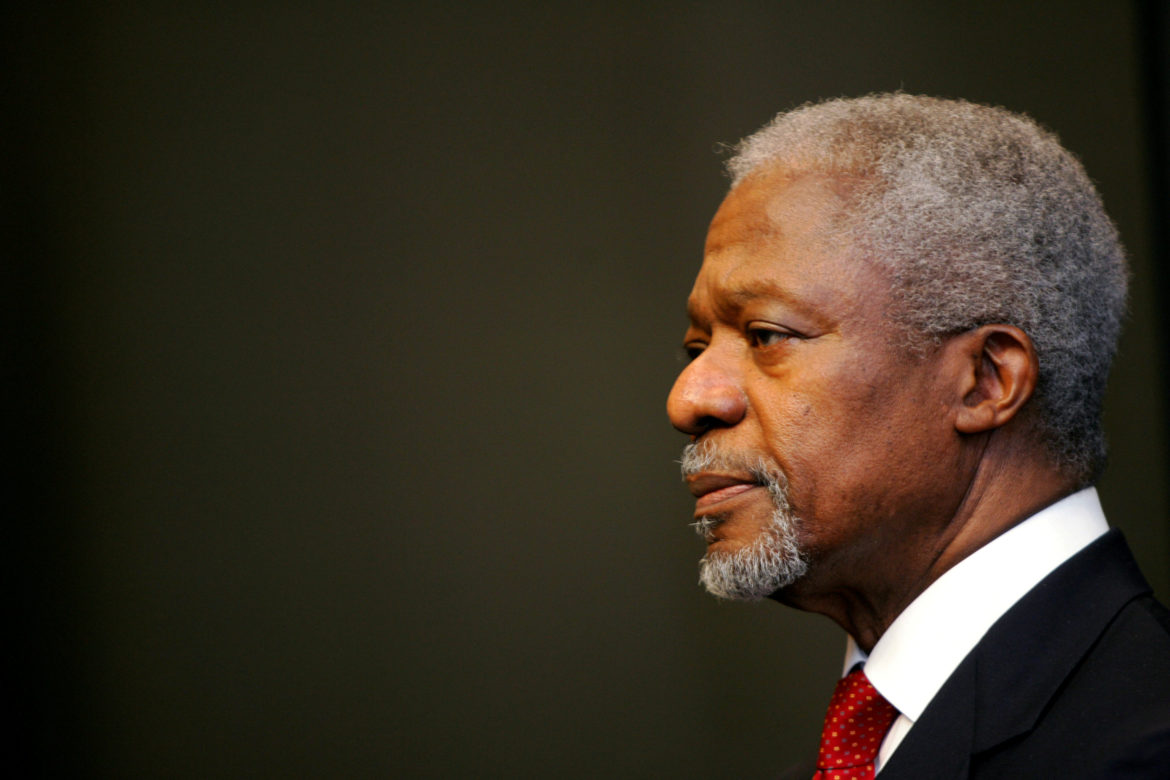 “It is my aspiration that health finally will be seen not as a blessing to be wished for, but as a human right to be fought for.”

— Kofi Annan
Since the news of his death at 80 following a brief illness broke, international organizations led by the United Nations he led had published official statements paying tribute to the late Nobel Peace laureate and one of Africa’s most successful diplomats.
We take a closer look at what Kofi Annan achieved in healthcare.
As UN Secretary-General, Annan spoke glowingly on gender equality including its roles in development.
According to him, no other policy is as likely to raise economic productivity, or to reduce infant and maternal mortality; no other policy is as sure to improve nutrition and promote health—including the prevention of HIV/AIDS. He added that no other policy is as powerful in increasing the chances of education for the next generation.
“And I would also venture that no policy is more important in preventing conflict, or in achieving reconciliation after a conflict has ended. But whatever the very real benefits of investing in women, the most important fact remains: Women themselves have the right to live in dignity, in freedom from want and from fear,” Annan said.
In the global fight against HIV/AIDS, Annan also stressed the importance of empowering people living with AIDS with education.
He said: “Even if he can vote to choose his rulers, a young man with AIDS who cannot read or write and lives on the brink of starvation is not truly free. Equally, even if she earns enough to live, a woman who lives in the shadow of daily violence and has no say in how her country is run is not truly free.”
Annan stressed that larger freedom implies that men and women everywhere have the right to be governed by their own consent, under law, in a society where all individuals can, without discrimination or retribution, speak, worship and associate freely.
“They must also be free from want — so that the death sentences of extreme poverty and infectious disease are lifted from their lives — and free from fear — so that their lives and livelihoods are not ripped apart by violence and war. Indeed, all people have the right to security and to development,” he said.
Annan’s continual reference to healthcare stemmed from his personal experience along his career path which, for the United Nations, started at the World Health Organization. In 1962, he began his career in UN as a budget officer for the World Health Organization in Geneva.
As the Secretary-General, Annan reformed the UN bureaucracy, worked  against HIV, especially in Africa and launched the UN Global Compact.
Annan’s signatory achievement in healthcare was the establishment of the world’s largest fund for HIV/AIDS prevention, The Global Fund. This was because, throughout his years in the UN, he saw how epidemics such as HIV/AIDS, tuberculosis, and malaria stood in the way of global development, which he would later make a priority as Secretary-General.

After years in public health, Annan, who had a degree in economics, wanted to bring global attention to the ways in which an untreated epidemic directly affects the UN’s development agenda in Africa’s poorest nations. In April 2001, Annan stood before Nigerian President Obasanjo and other UN officials at the African Summit on HIV/AIDS, Tuberculosis, and Other Infectious Diseases in Abuja, Nigeria and proposed a global AIDS fund.

“This is a conference about Africa’s future,” Annan said before unveiling his action plan to fight the pandemic. “AIDS has become not only the primary cause of death on this continent, but our biggest development challenge. And that is why I have made the battle against it my personal priority.”

Annan’s call to action against the AIDS epidemic first addressed ways to improve prevention in developing nations through education. He also acknowledged the dire need of improving underprivileged people’s access to medication and sought to work with pharmaceutical companies in offering medications to developing nations at greatly reduced prices.

Annan also championed the advancement of scientific research on the virus. “We must deliver scientific breakthroughs,” he said in the proposal. “We are still a long way from finding a cure for HIV/AIDS, and a long way from finding a vaccine against it. We must make sure that the search is given the highest priority in scientific budgets, and be ready, as soon as it produces results, to make them available where they are most needed — not only to those who can afford them.”

Recognizing the money was needed for build awareness campaigns and fund research, Annan requested that the United Nations spend an additional seven-to-ten billion dollars a year on the struggle against HIV/AIDS over an extended period of time. By June of 2001, the UN General Assembly approved the action plan and the permanent secretariat of the Global Fund to Fight AIDS, Tuberculosis, and Malaria (usually shortened to just the Global Fund) was established the following year.

The Global Fund is now considered the world’s largest fund to support the prevention and treatment of AIDS and other epidemics, having dispersed more than 33 billion dollars in aid to countries facing health crises since its creation. According to the organization, it has supported 11 million people on antiretroviral therapy for AIDS and saved 22 million lives worldwide.

“So this is a moment of hope, and potentially a turning point,” Annan said of establishing The Global Fund. “We can defeat the scourge of HIV/AIDS. For the sake of Africa’s future, we must.”

EXPLAINED: When will the NHI be implemented?

Lack of good oral health may up hypertension...

How exercise affects our memory

How communities will recover from the aftermath of...

[…]please go to the web-sites we comply with, which includes this one, as it represents our picks from the web[…]

Aw, this was an incredibly good post. Taking a few minutes and actual effort to make a great articleÖ but what can I sayÖ I put things off a whole lot and never manage to get nearly anything done.

Way cool! Some extremely valid points! I appreciate you writing this post and also the rest of the website is really good.

Good day! I just want to offer you a huge thumbs up for the excellent info you have got right here on this post. I’ll be returning to your web site for more soon.|

Grade A Carbon Steel (ASTM A53, A523, API 5L PSL1) Minimum Yield Strength: 30,000 psi Maximum Yield Strength: None Minimum Tensile Strength: 48,000 psi Notes: This grade might be made use of for basic pipeline, line pipe, or conduit pipeas defined in the various ASTM and API specifications.

Way cool! Some very valid points! I appreciate you writing this write-up and the rest of the website is also really good.

Hi! I know this is kind of off topic but I was wondering if you knew where I could find a captcha plugin for my comment form? I’m using the same blog platform as yours and I’m having trouble finding one? Thanks a lot!|

Hello! I just wanted to ask if you ever have any issues with hackers? My last blog (wordpress) was hacked and I ended up losing many months of hard work due to no data backup. Do you have any methods to stop hackers?|

[…]we prefer to honor many other world-wide-web web-sites around the net, even when they aren’t linked to us, by linking to them. Beneath are some webpages worth checking out[…]

There are definitely loads of details like that to take into consideration. That is a great point to deliver up. I provide the thoughts above as basic inspiration but clearly there are questions just like the one you convey up the place crucial factor can be working in honest good faith. I don?t know if best practices have emerged around things like that, but I am certain that your job is clearly identified as a fair game. Both boys and girls feel the impact of just a moment’s pleasure, for the remainder of their lives.

[…]usually posts some pretty intriguing stuff like this. If you’re new to this site[…]

Yes! Finally something about keyword1.|

Way cool! Some very valid points! I appreciate you writing this post plus the rest of the site is really good.

Piece of writing writing is also a excitement, if you be familiar with afterward you can write otherwise it is complicated to write.|

Have you ever considered about including a little bit more than just your articles? I mean, what you say is important and all. However just imagine if you added some great visuals or video clips to give your posts more, “pop”! Your content is excellent but with images and videos, this website could undeniably be one of the greatest in its niche. Superb blog!|

Wonderful post! We will be linking to this particularly great article on our website. Keep up the great writing.