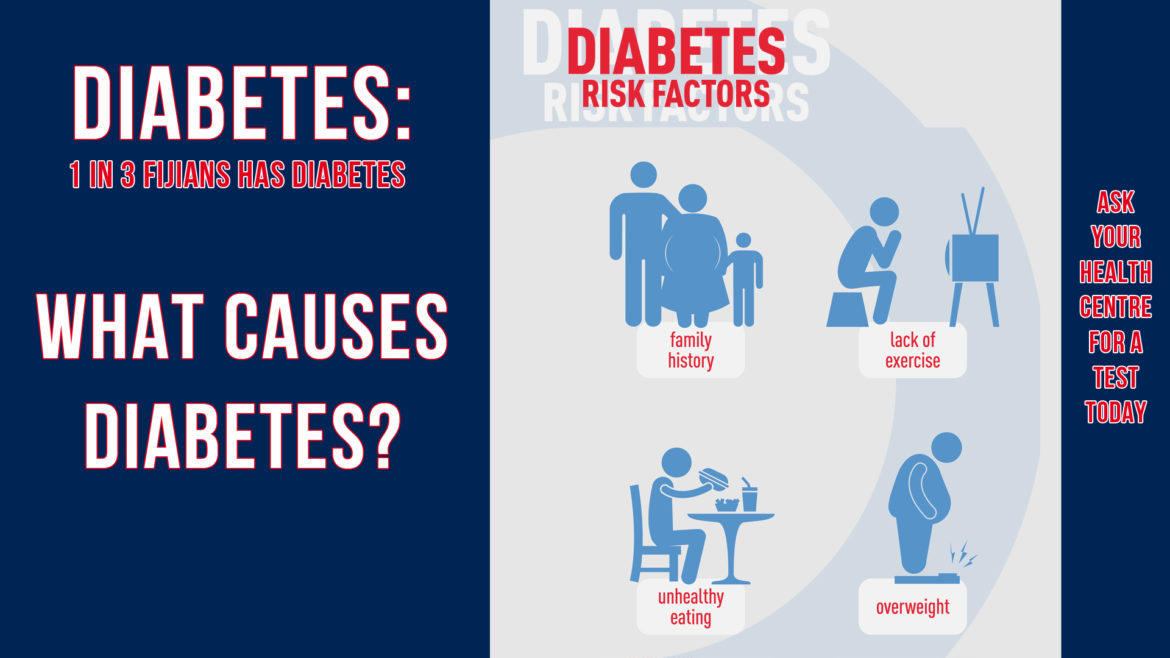 The causes of type 1, type 2 and gestational diabetes differ, and despite popular belief, none of them are directly caused by eating too much sugar.

The underlying causes of diabetes vary by type.

Type 1 diabetes occurs when the immune system attacks and destroys the insulin-producing cells in the pancreas (the beta cells). As a result, the body is left without enough insulin to function normally (i.e. it becomes insulin deficient). This is called an autoimmune reaction, because the body attacks itself and produces antibodies to its own insulin-producing cells, thereby destroying them.

Researchers don’t exactly know why this process is activated in some people. Apart from a possible genetic predisposition, the following triggers may be involved:

When a person with type 1 diabetes develops symptoms, most of the beta cells in the pancreas have already been destroyed.

The causes of type 2 diabetes are multifactorial and complex. But even though there is no single cause, there are some well-known predisposing factors – the most overwhelming being obesity and a family history of type 2 diabetes.

Type 2 diabetes is the result of both insulin resistance (when the cells don’t respond well to insulin and can’t easily take up glucose from the blood) and progressive beta-cell damage, resulting in too little insulin being secreted by the pancreas.

By the time a person is diagnosed with type 2 diabetes, up to 50% of the beta cells in the pancreas have usually been damaged. In fact, these cells may have been declining for up to 10 years before the diagnosis. Along with raised blood pressure and elevated cholesterol levels, this predisposes the person to arterial damage years before diabetes is diagnosed. So, at the time of diagnosis, the person is already at risk for cardiovascular disease (CVD).

Your risk of getting type 2 diabetes is higher if:

There’s a history of diabetes in your family
You’re middle-aged or older
You’re overweight or obese
You’re middle-aged and have high blood pressure (hypertension)
You’ve given birth to a child weighing more than 4.5kg, was diagnosed with gestational diabetes or have/had polycystic ovarian syndrome (PCOS)

It isn’t known exactly why some women develop gestational diabetes, but there is often a positive family history of diabetes.

The woman’s weight may also play a role. Changing hormone levels and weight gain are part of a healthy pregnancy, but both changes make it more difficult for the body to keep up with its need for insulin. This may lead to gestational diabetes. As pregnancy progresses, the placenta also produces insulin-blocking hormones, which might result in a woman’s blood-glucose levels becoming elevated if there isn’t enough insulin to counter this effect.

Diabetes: when to see your doctor

Things to do in and around Johannesburg this Women’s Day

Health department expects to be sued over proposed...

How can stress be managed?

Can the keto diet screw with your period?

How the new Apple watch could save your...

Way cool! Some extremely valid points! I appreciate you penning this post and also the rest of the website is very good.

This is a topic which is close to my heart… Many thanks! Exactly where are your contact details though?

I used to be able to find good advice from your content.

For anyone considering building a business out from the hobby, they have to imagine a name. Your company’s name is very necessary for working on your business. It ought to be memorable, memorable and ought to connect with your small business and whatever products you intend to market.

Iím amazed, I have to admit. Seldom do I encounter a blog thatís both equally educative and interesting, and without a doubt, you have hit the nail on the head. The issue is something which not enough folks are speaking intelligently about. Now i’m very happy I stumbled across this during my hunt for something concerning this.

Spot on with this write-up, I absolutely believe that this site needs a great deal more attention. Iíll probably be back again to see more, thanks for the advice!

Pretty! This was a really wonderful post. Thank you for providing this information.

Hello there! I simply want to give you a huge thumbs up for your excellent information you’ve got here on this post. I’ll be coming back to your website for more soon.

I could not refrain from commenting. Very well written!

Excellent article. I definitely appreciate this site. Keep it up!

There is definately a great deal to find out about this issue. I really like all of the points you’ve made.

bookmarked!!, I love your blog.

You’ve made some good points there. I checked on the internet to learn more about the issue and found most people will go along with your views on this website.

I enjoy looking through an article that can make men and women think. Also, thanks for allowing me to comment!

I’m more than happy to discover this site. I wanted to thank you for ones time just for this fantastic read!! I definitely loved every part of it and i also have you bookmarked to check out new things on your blog.

Having read this I thought it was rather informative. I appreciate you spending some time and energy to put this article together. I once again find myself personally spending a lot of time both reading and commenting. But so what, it was still worthwhile!

Good information. Lucky me I recently found your site by accident (stumbleupon). I have bookmarked it for later!

There is definately a lot to know about this issue. I really like all the points you made.

I want to to thank you for this good read!! I definitely enjoyed every little bit of it. I have you saved as a favorite to check out new things you postÖ