10 Ways to keep healthy with mushrooms 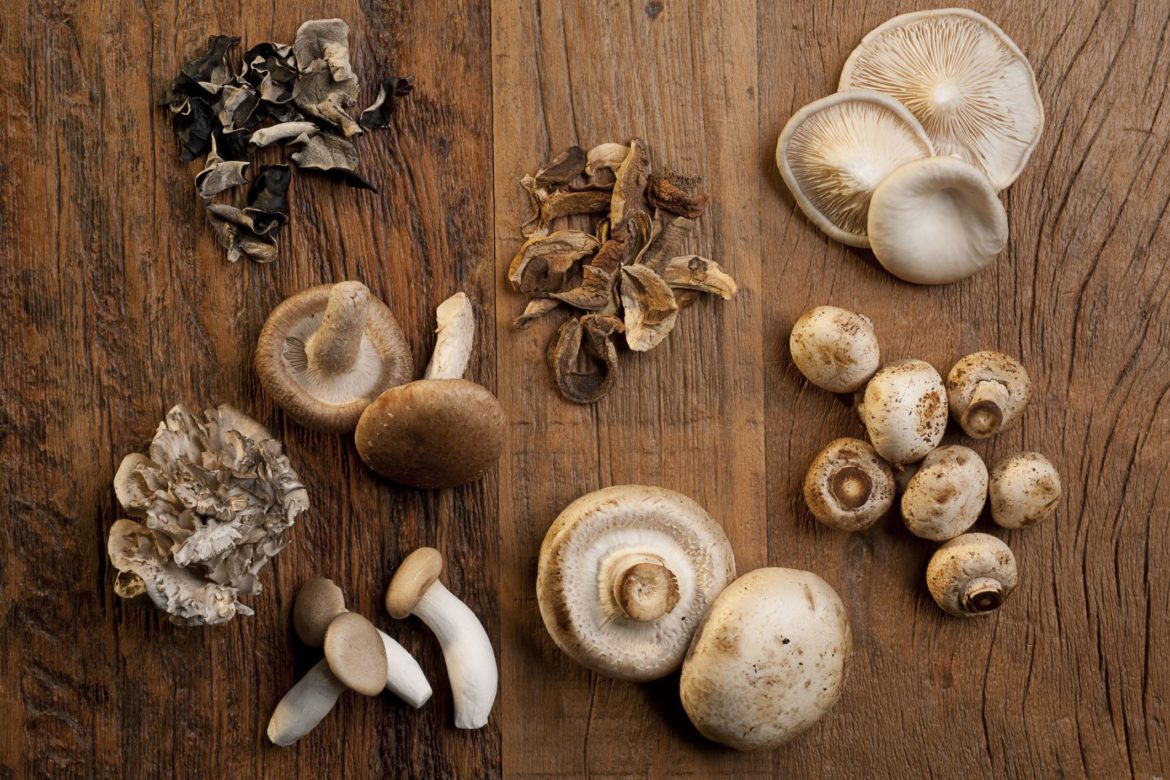 Ongoing international research around fresh cultivated mushrooms is increasingly indicating that these readily available, affordable, versatile and delicious treasures from nature are indispensable when it comes to looking after your health.

Reduce the incidence of heart attacks

Excessive salt intake is associated with high blood pressure (or hypertension), which can damage the arteries and lead to heart disease, stroke, and other health problems.  Fresh mushrooms are one of the best low-sodium food choices we can make as they contain only 14mg of sodium per 100gms! When considering the fact that a low salt diet allows between 400 – 1000 mg of sodium per day – their low sodium content is even more impressive!

A 2010 research study by the South African Mushroom Farmers’ Association (SAMFA) confirmed fresh mushrooms as a formidable ally to aid weight loss. They have a high nutrient density compared to their KJ/Kcal content (one cup of raw mushrooms contain approximately 20 calories) and provide essential nutrients without hugely increasing calorie intake.  It also reduces the consumption of sodium, saturated fat or other compounds linked to poor health.

Ally in the fight against breast cancer

Around the globe stretching from western Australia to California, new breast cancer research studies seem to confirm the dietary link: Mushrooms contain phytochemicals that are found to specifically suppress breast & prostate cancer making them important partners in the battle to win this fight. They also contain a fatty acid, conjugated linoleic acid, that has the ability to inhibit two enzymes called AROMATASE & 5-ALPHA-REDUCTASE that are involved in these cancers.

Selenium is found to have an anti-cancer affect in prostate cancer particularly and mushrooms contain selenium  in quantities much higher than any other plant food. Research seems to indicate that an increased intake of selenium decreases the incident of prostate cancer by up to 60%.  One serving of Portabellini mushrooms (100gm) provides almost a 1/3 of the daily value for selenium. Portabellas (big browns) and white button mushrooms are also good sources of the nutrient.

Fresh cultivated mushrooms contain important anti-aging antioxidants such as Ergothioneine that fights free radicals.  Wheat germ has always been considered an essential source for this antioxidant, but apparently mushrooms contain twelve times more! And as they are readily available and affordable, eating them may be a better long-term anti-ageing investment than those expensive creams!

Vitamin D increases our ability to fight infections by increasing the production of antimicrobial peptides that can destroy viruses, bacteria and fungi. Mushrooms are the only vegetable that naturally contains Vitamin D. A 100g of white button mushrooms contains 4% of the daily requirement of Vitamin D.

Mushrooms are also packed with B vitamins: thiamine (B1), riboflavin (B2), niacin (B3), pyridoxine (B6) and folate (especially important during the early stages of pregnancy) and contain essential minerals: potassium, selenium, phosphorous and copper and small, but nutritionally important, amounts of iron.

Recommended lifestyle changes to control your blood pressure include attaining and keeping a healthy weight, cutting back on salt and eating more foods rich in potassium.

Fresh mushrooms are high in potassium.  In fact most people may be surprised to learn that while orange juice is touted as one of the highest potassium foods, one medium Portabella mushroom or five white button mushrooms have more potassium than an orange!

Mushrooms provide a significant amount of copper – one of the essential minerals that help our body to produce red blood cells to function efficiently.  A cup of stir-fried white button mushrooms provides 0.3 milligram of copper, which is about one-third of the recommended daily intake for adults.

The king of Umami

While many ingredients have umami, there is one that stands alone as the king of umami: fresh mushrooms! Mushrooms not only deliver plenty of umami on their own, they actually intensify the umami of the other ingredients, an effect called “synergy.” This means that by adding mushrooms to just about any savoury dish, everything else in the dish will taste even better!

So there you have it! Fresh mushrooms are the ultimate trump card – delicious and angelically good for you too!   Now all you have to do is make sure that you throw a handful of mushrooms into every dish you serve!

Is Thanksgiving Good, or Bad, for Your Mental...

Is My Kid Contagious?

How Sleep ‘Cleanses’ Your Brain and Helps Lower...

Ill immediately grab your rss feed as I can’t find your email subscription link or e-newsletter service. Do you’ve any? Kindly let me know so that I could subscribe. Thanks.

[…]very few internet sites that take place to become detailed below, from our point of view are undoubtedly properly worth checking out[…]

Good information. Lucky me I found your blog by accident (stumbleupon). I have book marked it for later!

AMERICAN Steel Pipe has been producing line pipe for a variety of applications considering that 1963. Our Birmingham, Alabama, facility residences the most recent in modern technology in 2 mills and also two refining facilities.

I like the helpful info you provide in your articles. I will bookmark your blog and check again here frequently. I’m quite sure I?ll learn many new stuff right here! Best of luck for the next!

Howdy just wanted to give you a quick heads up. The words in your post seem to be running off the screen in Ie. I’m not sure if this is a formatting issue or something to do with internet browser compatibility but I thought I’d post to let you know. The style and design look great though! Hope you get the issue resolved soon. Cheers

Aw, this was an extremely nice post. Taking a few minutes and actual effort to generate a very good articleÖ but what can I sayÖ I hesitate a whole lot and don’t seem to get anything done.

Great post! We will be linking to this particularly great article on our site. Keep up the good writing.

[…]one of our visitors not long ago recommended the following website[…]

Everything is very open with a precise description of the issues. It was definitely informative. Your website is useful. Many thanks for sharing!

Hello there! I could have sworn Iíve visited this website before but after looking at some of the articles I realized itís new to me. Anyways, Iím certainly pleased I found it and Iíll be book-marking it and checking back regularly!

Definitely consider that that you stated. Your favorite justification appeared to be on the web the simplest factor to take into accout of. I say to you, I definitely get annoyed while people consider concerns that they just do not realize about. You controlled to hit the nail upon the highest and also outlined out the whole thing with no need side effect , people could take a signal. Will likely be again to get more. Thanks

I would like to thank you for the efforts you have put in penning this blog. I really hope to check out the same high-grade blog posts from you in the future as well. In truth, your creative writing abilities has inspired me to get my very own site now 😉

Thank you for any other informative blog. The place else could I am getting that kind of info written in such a perfect method? I have a project that I am just now running on, and I have been on the glance out for such info.

You made a number of good points there. I did a search on the matter and found nearly all persons will consent with your blog.

There’s certainly a lot to find out about this issue. I love all the points you have made.

[…]check beneath, are some totally unrelated internet sites to ours, even so, they may be most trustworthy sources that we use[…]

I was wondering if you ever thought of changing the layout of your website? Its very well written; I love what youve got to say. But maybe you could a little more in the way of content so people could connect with it better. Youve got an awful lot of text for only having 1 or 2 pictures. Maybe you could space it out better?

I’m not that much of a online reader to be honest but your sites really nice, keep it up! I’ll go ahead and bookmark your site to come back later. All the best

This is a very good tip especially to those fresh to the blogosphere. Simple but very precise infoÖ Thank you for sharing this one. A must read post!

You really make it seem really easy together with your presentation however I find this topic to be actually one thing that I feel I might never understand. It sort of feels too complex and extremely large for me. I’m having a look ahead for your next publish, I will attempt to get the grasp of it!

I was recommended this website by my cousin. I am not sure whether this post is written by him as nobody else know such detailed about my difficulty. You are wonderful! Thanks!

Great web site you’ve got here.. Itís hard to find high-quality writing like yours nowadays. I really appreciate individuals like you! Take care!!

I used to be able to find good information from your blog posts.

Nice post. I learn something new and challenging on sites I stumbleupon every day. It’s always useful to read through content from other authors and use something from their websites.

When I initially commented I seem to have clicked on the -Notify me when new comments are added- checkbox and from now on whenever a comment is added I receive four emails with the same comment. Perhaps there is a way you are able to remove me from that service? Appreciate it!

A motivating discussion is definitely worth comment. There’s no doubt that that you should publish more about this issue, it may not be a taboo matter but usually people don’t discuss such topics. To the next! Best wishes!!

Usually I do not learn article on blogs, but I wish to say that this write-up very pressured me to check out and do so! Your writing taste has been amazed me. Thank you, very great article.

Hi! I know this is somewhat off topic but I was wondering if you knew where I could locate a captcha plugin for my comment form? I’m using the same blog platform as yours and I’m having problems finding one? Thanks a lot!

I was able to find good information from your blog posts.

Aw, this was an incredibly good post. Taking the time and actual effort to create a very good articleÖ but what can I sayÖ I procrastinate a whole lot and never manage to get nearly anything done.